For some they may need to consider leaving their local churches. But that doesn’t have to be a bad thing. Many are needlessly in turmoil.

The Christian tradition is broad and deep.

And there’s an entire robust and rich tradition of Christianity that’s here and available for anyone who wants a more meaningful Christian faith: Orthodoxy, Catholicism, Anglicanism, Lutheranism, Presbyterianism. Go backwards.

But maybe the temptation for the person who has grown up in evangelicalism is to become like those skeptical dwarves from the Last Battle and think, “Well religious institutional faith is all just a mess. That’s the problem!”

If someone feels like the problem is all religious faith, consider the evidence:

2. A finite, physical universe with a beginning demands a spaceless, timeless, powerful cause. (See Al-Ghazali and William Lane Craig)

3. Our world is one in which consciousness has emerged. (See Thomas Nagel and JP Moreland)

As far as I can see, there’s no way of honestly getting around the first two pieces of evidence. Place those in conjunction with the third, and now we have a good case to entail a commitment at least to supernaturalism, and therefore warrant some kind of religious devotion. If only there was a way to know how to properly express that religious devotion…Continue to look at the data:

4. Three of the world’s largest religious faiths which comprise nearly half the population (Judaism, Christianity, Islam) subscribe to a transcendent Creator of the universe to whom we owe our worship.

6. At least four of the world’s largest religious faiths (Judaism, Christianity, Islam, Hinduism) subscribe to the practices of private and corporate prayer, communal gathering, giving to the poor, fasting, and other virtuous practices.

This is not a knock down case, but the fact of the shared commonalities is strongly suggestive of a common object. Now it seems that we are circling in the neighborhood of Judaism, Christianity, and Islam. But there’s still more relevant data to collect:

7. Of all the major religious systems, history speaks the most and the most clearly about one. The story of history tells us of a seemingly insignificant Jewish teacher-Jesus of Nazareth- who made striking claims about himself, and was killed on account of his claims, and placed in a tomb. But we also know of an empty tomb, women and men who experienced appearances of the killed Rabbi and who soon began to worship Him. This movement of Jesus worshippers spread very quickly (despite life-threatening opposition) and remains to this day. (See Richard Swinburne, William Lane Craig, N.T. Wright, Timothy McGrew, Michael Licona, and Richard Bauckham).

8. Many people continue to report having visions of Jesus or being healed by Jesus (See Phillip Wiebe and Craig Keener). This may not be very interesting by itself as a piece of evidence, but when considered with (1) (2) (3) and (7), it becomes more evidence one has to deny or somehow explain naturalistically.

So, at the very least this leaves us with something like supernaturalism. The world appears to be a magical place, and there is Ultimate/Absolute Reality beyond the physical world. And at most, it leaves us with thinking that Jesus of Nazareth is Absolute Being truly revealed.
So now the question becomes if this Absolute Being i.e. Jesus, is responsible for my very existence and indeed not just for mine, but is responsible for all reality itself, what must I do so that my being corresponds to Absolute Being i.e. the way of Jesus. Does Jesus himself show us what such a life might look like? As a matter of fact, he does, and we have it on good authority that he shared it with twelve people closest to him who then went on to pass on “the way of Jesus” to their own successors. And this becomes the Church. Which leads us to the last piece of evidence:

9. The overwhelming impact of the Christian Church has been good for the world. (See Jonathan Hill and Rodney Stark)

This means that there is no avoiding the Church, as much as we may want to, if we want our lives to correspond to Ultimate Reality.
Perhaps all this is too abstract, however, and insufficient to muster the already believing Christian to go to church, and we need something more concrete. Practically, why bother going to church? It seems to me there are at least four good reasons to do so.

1. To partake of the Eucharist. The reason we go to church is so that we might partake of the body and blood of our Lord Jesus. No matter what one thinks about the mechanism at place, nearly all Christians from the inception of the Church until 1523 believed in the real presence of Christ in the eucharist. To not partake of the Eucharist is to miss out on the wonderful gifts God has offered to us through which we preserve our bodies and souls unto everlasting life. Why must we do this at church? Because it is a shared meal. Eating together binds us together. The bonds of friendship are built as we share in the physical act of eating and drinking. But this is no ordinary meal. This meal is a meal that connects us across every nation and every generation, and is fed to us by Christ. We eat bread and drink wine so that we might not forget a past and present reality, and in anticipation of a future reality. Eating the eucharist is commanded by Christ in the gospels so that it renews and sustains our faith.

2. To hear the Word of the Lord. People come to Church because they want and need to hear God’s Word anew for their lives. We must hear the prophetic voice spoken from the Scriptures in the present. Something divine and sacred happens in the sacrament of preaching. As someone who has sat under the proclamation as well exposited the Scriptures, I have experienced God’s living Word break into people’s hearts afresh. We cannot take this for granted. This cannot be had online. We cannot isolate ourselves into our own myopic readings of the Bible. Reading and hearing the Word is properly done in a bodily community of truth seekers.

3. To fellowship with other believers. A friend of mine once said that personal devotional Bible readings are one of the most self-centered practices evangelicals do. I take it he was being hyperbolic. But the point remains that as individuals we all have our own biases and prejudices. If Bible reading is a solitary project, they can tend to merely be an exercise in confirmation bias and feel-goodery. We need each other to get out of ourselves. We are all made in the image of God and we are all fallible. We need to help one another. Those people who you find shallow or ignorant or hypocritical, they need you. Even Aristotle recognized the value of the strength of physical community. He says “For it is possible that the many, though not individually good men, yet when they come together may be better, not individually but collectively…for where there are many, each individual, it may be argued, has some portion of virtue and wisdom, and when they have come together, just as the multitude becomes a single man with many feet and many hands and many senses, so also it becomes one personality as regards the moral and intellectual faculties.” There are many Christians who desperately desire community with other believers but do not have the privilege.

4. It’s good for happy and healthy families. It shouldn’t come as a huge surprise that families who regularly attend church are less likely to practice self-destructive behavior. Robert Putnam says that children who go to church “have better relationships with their parents…have more friendships with high-performing peers…and are less prone to substance abuse.”

So, there are some reasons for why people should go to Church.

But, are there any reasons not to go to church?

There are undoubtedly perfectly legitimate prudential reasons why someone may not attend church temporarily. Everyone seems to agree on that. So, I’ll put those in a separate category.

Are there any arguments why someone might not attend church indefinitely?

Here are two rough arguments, though there might be more.

1. Religious trauma. For some, the church has been a source of real, serious, and intense trauma and abuse. For people who have severely suffered under the church, they cannot entrust themselves to the church. The church has failed these people immensely, and these people either have no desire and maybe psychologically are not able to give second chances. So that might provide warrant to not participate in the church indefinitely.

2. Church is contrary to human nature. The second argument has to do with the church as being not natural. The vision of the church received in the New Testament is that people who have nothing to do with each other except are united in Christ share their lives together and live as one organism, one body, one family. To form intimate mutual bonds of love with people of which you have nothing in common might be impossible. Yet the Church claims that it is a place where all are brought together solely in the name of Christ, and Christ’s love is sufficient to bind. One might argue that such an enterprise is not even possible on the grounds that it is so contrary to human nature. Of course, it does not necessarily follow from this not to go to church. Maybe the solution is to go to a church where there are people you have more things in common with. 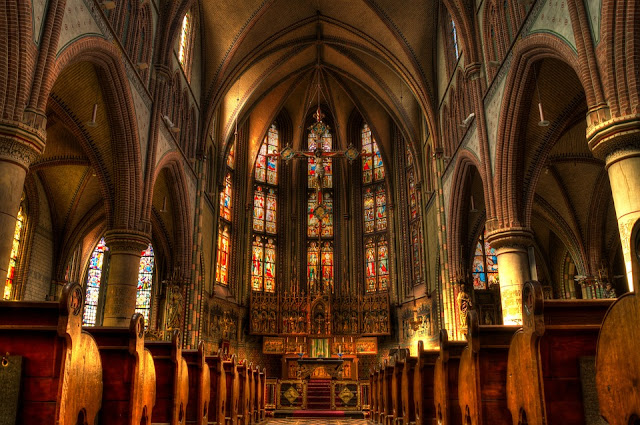