Something strange happened last week within the Society of Christian Philosophers. If you don’t know, the Society of Christian Philosophers is simply a formally organized group of philosophical scholars who identify as Christians. It is (as far as I know) the broadest and largest academic organized group of Christian philosophers. Like other academic groups, they come together throughout the year to present lectures, discuss ideas, and keep up with the latest news in Christian philosophical discussions. The group was founded in 1978 and some of its past presidents have included esteemed thinkers like Alvin Plantinga, Nicholas Wolterstorff, and Eleonore Stump. The current president of the SCP is Michael Rea who also teaches philosophy at the University of Notre Dame.

Last week at the Midwest meeting for the Society of Christian Philosophers, Richard Swinburne,  professor emeritus of phi 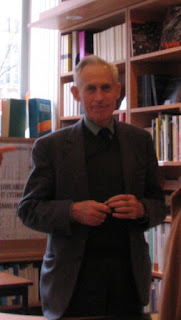 losophy at Oxford, and a pioneer of reclaiming Christian faith a respected place within academia, was invited to be the keynote speaker on the topic of Christian Moral Teaching on Sex, Family, and Life.

Okay. Seems straightforward enough. A Christian philosopher giving a talk on the Christian view of sexual ethics to a group of other Christian thinkers at a formal Christian event.

However, here is where things get odd.

After Professor Swineburne’s talk, I happened to see a post by Michael Rea (the president of the SCP) on his Facebook saying: “I want to express my regret regarding the hurt caused by the recent Midwest meeting of the Society for Christian Philosophers. The views expressed in Professor Swinburne’s keynote are not those of the SCP itself. Though our membership is broadly united by way of religious faith, the views of our members are otherwise diverse. As Preisdent of the SCP, I am committed to promoting the intellectual life of our philosophical community. Consequently (among other reasons), I am committed to the values of diversity and inclusion.”

Now I should preface my response by saying a few things.

First, I am not an official member of the Society of Christian Philosophers. I have frequented their website a number of times, and found helpful resources. I have looked up to many of the members and leaders of the group, and appreciate the collaborative work that they are doing particularly from a place of Christian identity.

Second, I was not present at the meeting where Professor Swineburne gave his presentation. So I only have second-hand reports of what he said.

Third, I do not know Michael Rea personally, but I’ve appreciated his written work, and from what I’ve seen via online videos he seems like a smart, great guy.

That being said, I have to admit my initial reaction to Michael Rea’s facebook post was one of shock and bewilderment. I was legitimately confused and also curious. What was it, I wondered that Professor Swineburne had said that would deserve such a serious apology from the president no less to everyone in the SCP.

Well, as it turns out, Richard Swinburne, the esteemed Christian philosopher from Oxford, was arguing that homosexuality was analogous to a disease and a disability. And apparently, there were no few people present who were upset and hurt over these claims.

Again I was not there, so I don’t know how or what exactly he said.

But, let’s suppose for the sake of argument that Professor’s Swinburne’s comments at the event were poorly expressed,  and his argument could have been more charitably stated. Maybe that happened or maybe he was giving a logical, philosophical case (as most philosophers do) as to why he thought homosexuality was unethical. Either way does that really necessitate an apology from the president of the SCP distancing himself and the organization as a whole from Professor Swineburne. Because some persons were emotionally offended. These are people with Ph.D.’s we’re talking about, not undergraduates. Scholars. Teachers. Professional Philosophers.

It’s funny because philosophers are able to bracket their personal feelings all the time when wrestling with deep ethical and practical issues, and they frequently try on different perspectives to see if it works for the sake of thoughtfully and rigorously engaging with the arguments and ideas in the pursuit of truth.  That is what we are after as philosophers isn’t it? The desire to pursue the truth no matter where it leads us. But this issue is off-limits?

Maybe I’m crazy, but wouldn’t a commitment to “diversity and inclusion” entail a diversity of ideas and inclusion of people who you don’t agree with…?